In Tasmania, the Devil Now Faces Its Own Hell

LAUNCESTON, Tasmania - Even by the brutish standards of Tasmanian devils, Rosie, Harry and Clyde have led a lamentable life.

A year ago, when the three were each the size of a sesame seed, they wriggled out of their mother's birth canal and undulated their way to her pouch. There, each locked onto a teat and grew like gangbusters.

But tragedy struck. Within months, their mother developed devil facial tumor disease - a mysterious malady that in the last three years has killed nearly half of all the world's devils, marsupials that are found only in Tasmania. Shortly after she died, the baby devils, grown to the size of tiny puppies, were found dangling from their mother's pouch, starving to death.

Rescued and reared by hand, Rosie, Harry and Clyde recently joined six similarly orphaned devils at the Launceston Lakes and Wildlife Park, all in strict quarantine. The fate of their exotic species - Sarcophilus harrisii - may lie in what happens to these rambunctious youngsters in the next 12 to 18 months.

"If they contract the disease, devils may be headed for extinction in the wild," said Nick Mooney, a wildlife biologist with Tasmania's Department of Primary Industries, Water and Environment in Hobart. "If they're free of the disease, we may have reason for hope."

Right now, wildlife experts are struggling to comprehend the nature of the fast moving epidemic. Moving at a rate of 6 to 10 miles a year, it is 100 percent fatal. Only the west coast, isolated by mountain ranges inhospitable to devils, is disease free. Nearly half of the estimated 150,000 devils in Tasmania are now dead.

Devil facial tumor disease is grotesque; the mother of Rosie and her brothers died when grotesque tumors ballooned out of her face and neck, choking off her ability to eat. It is also an extraordinary puzzle. Scientists do not understand its cause, mode of transmission, time from infection until the tumors appear, or potential to infect others.

Their current best guess breaks all the rules of modern biology. Scientists suspect that the disease is caused by a cancer cell that itself moves from one animal to another when they bite one another.

Having declared an emergency, officials are trapping healthy devils for captive breeding in case the disease cannot be stopped. The real devil bears no resemblance to Taz, the Warner Brothers Looney Tunes cartoon character that roars and whirls like a dervish. A real devil is the size of a spaniel, with strong forelimbs, a huge head and a disappointing back end. Geoff King, who lures devils to his ranch in northwestern Tasmania for ecotourists to observe, said they lived solitary, nocturnal lives, coming together to devour carrion. Its bite is as strong as that of a dog four times its weight. "They are nature's cleanup crew," Mr. King said.

Females have lustrous black coats with a purple hue, white stripes on their rump or below the neck, exceptionally long luxurious whiskers and narrow pointy faces. When they get excited, their ears turn blood red. "They are beautiful," Mr. King said.

Males have similar markings along with big boxy heads and heavily scarred faces and rumps. A devil can eat a quarter of its body weight in one feeding. "They're as tough as bloody nails," Mr. King said.

Devils got their name from early European settlers who heard spine-chilling screams and thought that Satan was surely in the backyard. "Devils do make weird noises," Mr. King said. "When they first arrive at a carcass," he said, "they make a recognition signal - whorf? Are you there? Then they start hissing from the stomach. Growls turn to whines and flow into screeches. They sound like a groaning witch."

Devil sex turns up the volume. In March and April, males engage in vicious, blood-soaked combat, said Dr. Menna Jones, a wildlife biologist who also works in the environment department. Females select "big butch dudes," Dr. Jones said, and allow themselves to be dragged by the scruff of the neck into a burrow. There they scream and fight for several days, mating many times for hours at a time. At the end of such bouts, the male thrusts his sperm into the female every two minutes.

Three weeks later, the female gives birth to about 20 or 30 embryos that wiggle through a string of mucus that leads to her pouch, which has only four teats, Dr. Jones said. The first to arrive lock on and survive. All others perish. 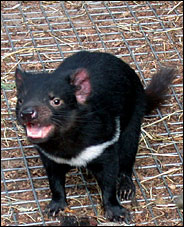 By August the pouch gets crowded. When she hunts, the mother leaves her roly-poly little devils in a den. The young are weaned at nine months, emerging from the den in the fall as goofy teenagers. Mom departs.

After six years of scavenging, screeching and seeking mates, devils abruptly die, Dr. Jones said. They are one of the few species in the world with so-called catastrophic mortality. How and why they die this way is not known, she said.

Tasmanians have always taken devils for granted, Mr. Mooney said. Few scientists ever bothered to study them. When the first animal with facial tumors was photographed, in 1996, he said, "people thought, eeew, that looks horrible, but it did not ring alarm bells."

After five more years scientists realized the disease was widespread, Mr. Mooney said. Later surveys show a devastating picture. Spread animal to animal, the disease is now endemic to two-thirds of the island, which is slightly smaller than West Virginia. The disease starts out as a raspberrylike lesion on the gums, palate or under the tongue, Dr. Jones said. Within months, tumors erupt around the mouth, neck and face. A few weeks later, they explode, weeping and oozing, pushing out teeth, eyes or noses, and sometimes invading the rest of the body. "It is a disgusting sight," Dr. Jones said. "Animals starve to death three to six months after the first signs of a tumor.

Here in Launceston, Dr. Stephen Pyecroft is spearheading the government's investigation into what is causing the disease. A virus seemed likely. But so far, Dr. Pyecroft said, every effort to identify a virus has come up empty-handed. A virus has not been ruled out, he added, but scientists are now entertaining other hypotheses.

Since Tasmania has widespread use of agricultural chemicals and pesticides, researchers are looking at 10 toxins to see if devil disease is associated with poisons that can cause tumors.

But the leading theory is that devil facial tumor disease is caused by a transmissible tumor cell, Dr. Pyecroft said. It goes like this: About a decade ago, a random mutation occurred in a single animal in a type of cell involved in hormonal regulation. This devil developed tumors on or near its face. When another devil bit into the tumor, it was infected with tumor cells. With time, tumor cells were passed around in the bloody fray of devil social life, spreading the disease.

In this hypothesis, tumor cells alone are the infectious agent. In nature, this is not supposed to happen, Dr. Pyecroft conceded. Healthy animals exposed to pathogens, including tumor cells, will normally mount an immune response to fight off the infection.

But genetically speaking, devils are virtual clones. With scant variation in their DNA - perhaps from a population bottleneck in the recent past - they may have nearly identical immune systems. Hence they cannot fight off the tumor cells.

Every tumor cell examined so far is the same in every animal, male and female, regardless of area of origin. The chromosomal rearrangements, presumably from the one random mutation, are identical.

Dr. Pyecroft said another disease offered support for the idea that tumor cells could be infectious. That disorder, canine transmissible venereal tumor disease, is passed among dogs during sex or when they lick and sniff infected tissue. The tumors are identical, suggesting that they are passed by contact.

The big difference is that the disease is not fatal in dogs. They mount an immune response and get over it.

Researchers are growing devil tumor cells in petri dishes to explore their basic biology. "We're knocking weird cells on their heads to figure this out," Dr. Pyecroft said.

Meanwhile, Dr. Mooney's team is trapping devils islandwide to determine the extent of the epidemic. They are also in the process of trapping 25 young animals from apparently disease-free areas as an insurance policy. The juvenile devils are being placed in urban and offshore sites to keep them apart from older, wild devils. If after a year or so they show no signs of disease, they will be bred to ensure survival of their species.

Similarly, Rosie, Harry and Clyde are living with other orphans - Donny, Hansel, Gretel, Beatrice, Zilla and Scamp. "We usually don't see the disease until after the animals turn 2 years old," said Heather Hesterman, another biologist on the team. It is possible they might get the disease from their mother's milk or contact with her saliva, Ms. Hesterman said. On the other hand, they may have resistance to it.

Veterinarians will watch the orphans for the next year or so to see what happens.

"We have so many question marks, so little time," Ms. Hesterman said.

Picture 2: Carl Moore. Nick Mooney, a government biologist, is trying to save devils from extinction

Picture 3: Carl Moore. HOPE OF A SPECIES Clyde, whose mother died of facial tumor disease, is in quarantine with eight other young Tasmanian devils as scientists struggle to contain the epidemic.