Deconstructing the Gaze of Rembrandt

There was his sensitivity to human character, his grasp of light and shade, his virtuoso hand with a brush. But Rembrandt's self-portraits reveal another characteristic that may have contributed to his genius: a walleye.

Having studied 36 of those rather unforgiving self-portraits, a neuroscientist suggests that Rembrandt was stereoblind - that is, because his eyes did not align correctly, his brain automatically used one eye for many visual tasks. This may have allowed him to flatten images automatically as he observed the world, and then transfer that perspective onto the two-dimensional canvas, says Margaret S. Livingstone, a professor of neurobiology at Harvard Medical School.

Her findings are being published today in an article The New England Journal of Medicine.

Normally, the ability to depict a three-dimensional scene on a flat surface is greatly enhanced by closing one eye, Dr. Livingstone said.

"Art teachers instruct students to close one eye as they learn to draw," she said. Rembrandt may well not have needed to. 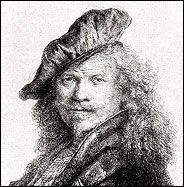 Dr. Livingstone, a leading expert on visual perception, said that she first noticed something different about Rembrandt's eyes several years ago when she was gazing at several of his self-portraits at the Louvre. The eyes were just slightly asymmetrical.

Sometimes the right eye was out of register and sometimes the left eye, she said. It was unclear if the effect was random or systematic.

To find out, Dr. Livingstone and her a colleague, Bevil R. Conway, examined high-resolution images of self-portraits, both oil paintings and etchings, that are generally acknowledged to be genuine Rembrandts. Most of the works, made over a period of four decades, show one eye gazing directly at the viewer and the other eye deviating to the side. Rembrandt's portraits of others generally show the eyes properly aligned, Dr. Livingston said.

The researchers looked for the pattern in 24 oils and 12 etchings in which both eyes could be seen clearly, and confirmed the walleye effect in 35 of those 36 works. In 23 of the 24 paintings, the eye on the right side of the painting tends to look straight ahead and the other eye deviates outward. In the 12 etchings, the asymmetry is reversed because the artist scratches lines onto the plate to produce a reverse image, she said.

Walter Liedtke, the curator of European painting and specialist in Dutch and Flemish art at the Metropolitan Museum of Art, who has also focused on visual perception, said the findings seemed plausible. "But I worry a little in the case of self-portraits that Rembrandt may have been looking in a mirror to make them," he said. "The easel would be to one side and a mirror to the other, with one eye more or less perpendicular to the mirror. As to the other eye, it's hard to say. He'd be moving back and forth."

The condition that Dr. Livingstone and Dr. Conway have diagnosed, divergent strabismus, usually starts in early childhood when the muscles that align the two eyes fail to develop properly. Soon one eye focuses on visual scenes while the other eye drifts off to one side. To avoid double vision, children learn to suppress images from the wandering eye. The effect is similar to closing one eye.

People suffering from the condition can be cross-eyed or walleyed, Dr. Livingstone said. In either case, they are stereoblind, meaning their brains cannot combine independent images from each retina to create depth perception.

Luckily, stereoblindness is not a serious handicap in life, Dr. Livingstone said. The brain uses many cues to perceive depth, so people with strabismus have mostly normal vision. One exception is that they cannot, no matter how hard they try, see three dimensional images when they peer into View-Masters, the popular children's toy that presents separate images for each eye. Nor can they make sense of so-called "magic eye" images in which an object pops out of a seemingly chaotic background.

Ten percent of the population is stereoblind, Dr. Livingstone said. The condition can be so subtle that people do not recognize it in themselves or others. While their eyes may seem properly aligned, they are ever so slightly out of register. Such individuals also tend to be dyslexic.

Curious about whether stereoblindness and dyslexia are unusually common among artists, Dr. Livingstone and her colleagues, including a neuroophthamologist, examined the eyes of 53 famous artists selected from photographs at the National Portrait Gallery in Washington. "We found a surprising number of them show misaligned eyes," she said.

Reached by telephone yesterday, Mr. Rauschenberg said that he had no trouble seeing 3-D images in View-Masters, but that he was extremely dyslexic. "I see lithographs forwards and backwards at the same time," he said. "I don't have any trouble proofing. I see things both ways."

Stereoblindness would help any artist whose first goal, in rendering the world, is to acknowledge the flatness of a blank sheet of paper, said Dr. Conway, who is also an artist. "Where does one start?" he said. "The real world is so richly three-dimensional, it's hard to convey that richness of depth on paper."

Artists use many tricks to create the illusion of depth, he noted. Things with higher contrast or higher resolution appear to be nearer. Fuzziness and blueness pushes things into the distance. Such features are much more obvious to the artist when stereoscopic clues are removed.

Finally, artists who are stereoblind have a natural ability to focus on the shapes of objects and the space around an object, often referred to as negative space, Dr. Conway said. This gives them a natural advantage in developing flat images.

David Freedberg, a professor of art history at Columbia University who specializes in both 17th-century Dutch art and the science of perception, said yesterday that the findings "are altogether interesting and plausible."

"Of course, many people who are stereoblind have no artistic talent whatsoever," he said. The condition "may help" in drawing, he said, but does not in itself explain Rembrandt's genius.

Picture 1: :From "Rembrandt by Himself," edited by Christopher White and Quentin Buvelot (National Gallery Publications).
In Rembrandt's painted self-portraits (left panel) in which the eyes are clearly visible, his left eye frequently looks straight out and the right off to the side. It is the opposite in his etchings (right panel).

Picture 2: : Museum of Fine Arts, Boston. Detail of a 1639 etching. The eyes are second from bottom in the right panel above.