Roger Kennedy, Who Was Parks Chief Under Clinton, Dies at 85

Roger G. Kennedy, who was director of the National Park Service during the Clinton administration and an ardent preservationist of the nation's cultural, historic and artistic heritage for much of his life, died on Friday at his home in Rockville, Md. He was 85. 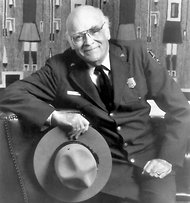 Mr. Kennedy learned he had malignant melanoma a year ago, his wife, Frances Kennedy, said in announcing his death.

His leadership of the park service, during a time of fiscal austerity, was just one role in a career of almost 60 years. Mr. Kennedy ran for Congress, served six presidents on boards and commissions, was a Washington correspondent for NBC News, wrote and produced television documentaries, helped reorganize the Ford Foundation, and for 13 years led the National Museum of American History, part of the Smithsonian Institution in Washington.

He was also a scholar and author who illuminated lesser-known and underappreciated stories about American history, art, landscape and architecture. Among his 20 books are "Hidden Cities," about prehistoric Indian life; "Mr. Jefferson's Lost Cause," arguing that Jefferson's policies toward the Deep South contributed to the Civil War; and his latest, "When Art Worked: The New Deal, Art and Democracy."

A focus on the unsung was also a theme of his park service work. As its director from 1993 to 1997, appointed by President Bill Clinton, Mr. Kennedy presided over the creation of eight parks that celebrate lesser-known niches of American history, including sites important to African-Americans and American Indians. The parks should represent all Americans, he argued.

Facing a Congressional mandate to shrink the federal bureaucracy, he reorganized and streamlined the service's field operations. But he resisted letting budget cuts interfere with the new parks. "The impulse to prune back the budgets," he said, was "code for ‘let's stop paying attention to blacks, Hispanics, women.' " He continued to devote resources to training park rangers in how to teach visitors about the history and meaning of a place.

He also introduced his staff to the emerging World Wide Web. Today, the park service Web site receives 1.4 million visits a day, second only to that of the Internal Revenue Service among government Web sites, the agency says.

And unlike others who have led the agency, Mr. Kennedy wore the service's official gray and green uniform to work every day. "Nobody messes with somebody in uniform," he said.

He was appointed to the parks job after serving as director of the Smithsonian's American history museum from 1979 to 1992. Arriving at a time when many viewed the Smithsonian as musty and irrelevant, he "threw open the dusty doors of history and invited the public to revel in its past," said Susan Stamberg, a friend and commentator on National Public Radio.

Mr. Kennedy felt there were many stories about American history and culture that had never been told, so he organized exhibits exploring the internment of Japanese-Americans during World War II, the migration of African-Americans from the South to the North, and the story of a thriving and sophisticated native civilization in North America long before Europeans arrived.

In 1969, Mr. Kennedy joined the Ford Foundation as a vice president, first in finance, then in the arts. He helped transform the organization from a family foundation dependent on Ford Motor Company stock into a more diverse and modern professional foundation.

Mr. Kennedy cut a robust figure, given to hugging. "He'd come up, grab your shoulders, peer into your eyes and ask how you were doing," said Jonathan B. Jarvis, the current director of the park service. "He was fascinated by people and ideas and utterly present as a friend."

Roger George Kennedy was born in St. Paul, Minn., on Aug. 3, 1926, the son of Walter J. Kennedy and Elisabeth Dean Kennedy. He grew up in St. Paul, where his father ran a family-owned sporting goods store.

He graduated in 1944 from St. Paul Academy (now St. Paul Academy and Summit School), a college preparatory day school. He developed his love for the outdoors as a teenager, when he guided canoe trips in Minnesota's lake country.

After a stint in the Navy, Mr. Kennedy went to Yale, where he was senior editor at The Yale Daily News. He received his bachelor's degree from Yale in 1949 and a law degree from the University of Minnesota Law School in 1952.

In 1953, he headed to Washington with his former campaign treasurer and friend, Warren E. Burger, later the chief justice of the United States. Both went to the Justice Department, Mr. Kennedy as a civil trial lawyer and Mr. Burger as an assistant attorney general.

About two years later Mr. Kennedy joined NBC News as a correspondent, covering the Supreme Court and the White House. He also produced documentaries for NBC. Though he left the network after several years to go into banking and finance, he continued to write for newspapers and magazines for much of his career.

In the 1960s, Mr. Kennedy was vice president for finance of the University of Minnesota and a consultant to venture capitalists, international bankers and insurance companies.

He was also a founder and the first chairman of the respected Guthrie Theater in Minneapolis, a founder of the Library of America publishing enterprise and an honorary member of the American Institute of Architects.

Mr. Kennedy married Frances Hefren in 1958. Besides his wife, he is survived by their daughter, Ruth Kennedy Sudduth of Stow, Mass., and a brother, John, of Boulder, Colo.

Mr. Kennedy's 21st book, "Cotton and Conquest: How the Plantation System Acquired Texas," about the spread of Southern culture to the Southwest, is to be published next year by the University of Oklahoma Press.