When temperatures plummet, most people bundle up in thick sweaters, stay cozy indoors and stoke up on comfort food. But a provocative new theory suggests that thousands of years ago, juvenile diabetes may have evolved as a way to stay warm. 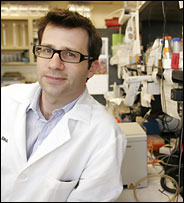 People with the disease, also known as Type 1 diabetes, have excessive amounts of sugar, or glucose, in their blood.

The theory argues that juvenile diabetes may have developed in ancestral people who lived in Northern Europe about 12,000 years ago when temperatures fell by 10 degrees Fahrenheit in just a few decades and an ice age arrived virtually overnight.

Archaeological evidence suggests countless people froze to death, while others fled south. But Dr. Sharon Moalem, an expert in evolutionary medicine at the Mount Sinai School of Medicine in New York, believes that some people may have adapted to the extreme cold. High levels of blood glucose prevent cells and tissues from forming ice crystals, Dr. Moalem said. In other words, Type 1 diabetes would have prevented many of our ancestors from freezing to death.

The theory is described in the March 30 online edition of Medical Hypotheses, a journal devoted to publishing bold, even radical, biomedical theories that are potentially important to the development of medicine.

Dr. Clive Gamble, a professor of geography and an expert on ancient human migration at the University of London, said the theory supported a growing body of evidence that Europeans were descended from hunters with a tolerance to cold climates and not farmers from warm ones. "As a Brit," he said, "this makes perfect sense to me."

Dr. Robert Hegele, an expert on diabetes and genetics at the University of Western Ontario, said the theory was "an interesting attempt to contribute a new idea to help understand the pathogenesis of Type 1 diabetes." But, he added, it has a major shortcoming: it fails to address the autoimmune nature of the disease.

Most doctors who treat diabetes are extremely skeptical about the idea. In a typical comment, one doctor said, referring to a dangerous complication of diabetes: "Are they kidding? Type 1 diabetes would result in severe ketoacidosis and early death."

Not necessarily, Dr. Moalem said in an interview. Back then, life expectancy was about 25 years for many people. Those with high glucose in their blood did not live long enough to suffer complications. But they did live long enough, despite the extreme cold, to reproduce.

Today, when people live much longer, the ravages of high blood glucose are all too familiar. They include heart disease, stroke, kidney failure, high blood pressure, nerve damage, foot ulcers and gum disease.

Dr. Moalem advocates using an evolutionary perspective to understand why the body is not better designed and therefore why diseases exist at all. By looking at the ancient environments in which humans evolved, he says, it should be possible to see if certain illnesses offer protective advantages.

For example, some diseases have been linked to human pathogens. A disorder that leads to harmful levels of iron in the blood, hemochromatosis, protects against bubonic plague. Sickle cell anemia, a blood disorder, reduces the ability of the malaria parasite to destroy red blood cells. Cystic fibrosis combats typhoid fever. Tay-Sachs disease may have evolved to combat tuberculosis.

If the theory is true, Type 1 diabetes, which strikes an estimated 29,000 young Americans each year, will be the first disease shown to have that evolved to protect people from the effects of rapid climate change.

Diabetes comes in two types: Type 1 diabetes occurs when the immune system destroys cells that produce insulin, a hormone that helps deliver glucose throughout the body; Type 2 occurs when cells throughout the body do not respond to normal amounts of insulin. Without insulin, glucose builds up into the blood. Type 2 diabetes is found all over the world, Dr. Moalem said, mostly in older overweight people. But Type 1 diabetes shows an inexplicable pattern. It is most prevalent in people descended from Northern Europeans. Finland and Sweden have extremely high rates of the disease. But it is rare in African, Asian and Hispanic populations. American Indians and Alaska Natives almost never get it unless they have significant Caucasian heritage.

Type 1 diabetes is diagnosed more often in winter than in summer. In those with the disease, blood glucose rises in colder months, regardless of diet. But in warmer climates, blood glucose does not vary with the seasons.

When families with a genetic susceptibility to the disease move south to warm climates, fewer people develop diabetes.

Numerous genes confer susceptibility to Type 1 diabetes, Dr. Moalem said. Risk factors are inherited from both parents. Beyond that, most experts believe that something in the environment may help set off the illness, like a virus.

Or cold air. Cold may turn on one or more metabolic pathways involved in the genesis of Type 1 diabetes, Dr. Moalem said. In fact, many of the metabolic changes seen in Type 1 diabetes mirror those seen in animals that are tolerant to cold.

Dr. Kenneth Storey, a biochemist at Carleton University in Ottawa, studies the wood frog, which is found in higher latitudes throughout the Northern Hemisphere, including the Arctic Circle. "The frog is the size of your thumb," he said.

As soon as its skin begins to freeze in winter, its liver begins pouring glucose into its blood. This depresses the freezing point of body fluids, rather like a slushy beverage, and places a protective barrier around proteins.

Eventually the frog produces so much glucose that its tissues are completely protected from the cold. It freezes solid, with no heartbeat, no circulation, no breathing, no muscle movement. In the spring, the frog thaws out and resumes normal life. Its diabetes is reversible.

Humans and other animals exposed to cold will first shiver to get extra heat, Dr. Moalem said. But after a while, they generate more heat by burning a special form of fat: brown adipose tissue. The ability of this tissue to produce heat depends on having a large amount of glucose. Insulin is not required. Thus, being diabetic would help shunt glucose from the blood toward the heat-making pathway of the brown adipose tissue.

Most adaptations to cold would have evolved gradually, as microbes, plants and animals learned to cope with changing climates, Dr. Moalem said. But ice cores from Greenland reveal a unique period in human history that could have forced people living in Northern Europe to adapt quickly or die.

The climate, particularly in Europe, began to cool 14,000 years ago. About 12,600 years ago, conditions worsened. Huge drops in temperature occurred over decades. Glacial-like conditions lasted 1,300 years in a period called the Younger Dryas.

While northern Asia underwent glaciation at the same time, it does not appear to have happened with the same speed and ferocity, Dr. Moalem said, perhaps explaining why Inuits and other populations that have long histories of living in frigid climates did not develop similar protective responses to cold.

Rather, they developed a different kind of defense against famine, called thrifty genes. People with such genes gain weight if they eat more than 1,000 calories a day. In today's calorie rich world, that might predispose them to Type 2 diabetes.

People living in the frigidity of far Northern Europe could have done three things, Dr. Moalem said. They could have tried to outrun the cold, or to build better shelters and cover themselves with animal skins, or to undergo biological adaptations.

Gene mutations take a long time to accumulate, Dr. Moalem said. But so-called epigenetic factors, which change the expression patterns of genes without altering their basic structure, can produce adaptations in just a few generations.

Dr. Gamble of London said that archaeological evidence supported a large and rapid depopulation of Northern and Western Europe that coincided with the rapid cooling and the spread of thick glacial ice of the Younger Dryas. Humans huddled in Iberia, awaiting a warmer climate.

Some people appear to have ended up in Sardinia, which today has a high rate of Type 1 diabetes, Dr. Moalem said. An analysis of the Y chromosome indicates common genetic roots between modern Sardinians and ancient Northern Europeans.

The idea that Type 1 diabetes is an adaptation to extreme cold needs much more research, Dr. Moalem said. Cause and effect have not been proved.

But it is not too early to explore biological solutions used by cold-tolerant animals in dealing with the complications of high blood sugar. Plants and microbes adapted to extreme cold might also produce molecules that could help treat Type 1 diabetes, he said.

Dr. Storey found three genes in the wood frog that turned on in response to freezing. He is now putting those genes into mammalian cells to see what happens.

Picture: Chad Hunt for The New York Times. Dr. Sharon Moalem has a theory about juvenile diabetes, warmth and the ice age.