This Is Your Brain Under Hypnosis

Hypnosis, with its long and checkered history in medicine and entertainment, is receiving some new respect from neuroscientists. Recent brain studies of people who are susceptible to suggestion indicate that when they act on the suggestions their brains show profound changes in how they process information. The suggestions, researchers report, literally change what people see, hear, feel and believe to be true.

The new experiments, which used brain imaging, found that people who were hypnotized "saw" colors where there were none. Others lost the ability to make simple decisions. Some people looked at common English words and thought that they were gibberish.

"The idea that perceptions can be manipulated by expectations" is fundamental to the study of cognition, said Michael I. Posner, an emeritus professor of neuroscience at the University of Oregon and expert on attention. "But now we're really getting at the mechanisms." 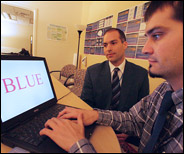 Even with little understanding of how it works, hypnosis has been used in medicine since the 1950's to treat pain and, more recently, as a treatment for anxiety, depression, trauma, irritable bowel syndrome and eating disorders.

There is, however, still disagreement about what exactly the hypnotic state is or, indeed, whether it is anything more than an effort to please the hypnotist or a natural form of extreme concentration where people become oblivious to their surroundings while lost in thought.

Hypnosis had a false start in the 18th century when a German physician, Dr. Franz Mesmer, devised a miraculous cure for people suffering all manner of unexplained medical problems. Amid dim lights and ethereal music played on a glass harmonica, he infused them with an invisible "magnetic fluid" that only he was able to muster. Thus mesmerized, clients were cured.

Although Dr. Mesmer was eventually discredited, he was the first person to show that the mind could be manipulated by suggestion to affect the body, historians say. This central finding was resurrected by Dr. James Braid, an English ophthalmologist who in 1842 coined the word hypnosis after the Greek word for sleep.

Braid reportedly put people into trances by staring at them intently, but he did not have a clue as to how it worked. In this vacuum, hypnosis was adopted by spiritualists and stage magicians who used dangling gold watches to induce hypnotic states in volunteers from the audience, and make them dance, sing or pretend to be someone else, only to awaken at a hand clap and laughter from the crowd.

In medical hands, hypnosis was no laughing matter. In the 19th century, physicians in India successfully used hypnosis as anesthesia, even for limb amputations. The practice fell from favor only when ether was discovered.

Now, Dr. Posner and others said, new research on hypnosis and suggestion is providing a new view into the cogs and wheels of normal brain function.

One area that it may have illuminated is the processing of sensory data. Information from the eyes, ears and body is carried to primary sensory regions in the brain. From there, it is carried to so-called higher regions where interpretation occurs.

For example, photons bouncing off a flower first reach the eye, where they are turned into a pattern that is sent to the primary visual cortex. There, the rough shape of the flower is recognized. The pattern is next sent to a higher - in terms of function - region, where color is recognized, and then to a higher region, where the flower's identity is encoded along with other knowledge about the particular bloom.

The same processing stream, from lower to higher regions, exists for sounds, touch and other sensory information. Researchers call this direction of flow feedforward. As raw sensory data is carried to a part of the brain that creates a comprehensible, conscious impression, the data is moving from bottom to top.

Bundles of nerve cells dedicated to each sense carry sensory information. The surprise is the amount of traffic the other way, from top to bottom, called feedback. There are 10 times as many nerve fibers carrying information down as there are carrying it up.

These extensive feedback circuits mean that consciousness, what people see, hear, feel and believe, is based on what neuroscientists call "top down processing." What you see is not always what you get, because what you see depends on a framework built by experience that stands ready to interpret the raw information - as a flower or a hammer or a face.

The top-down structure explains a lot. If the construction of reality has so much top-down processing, that would make sense of the powers of placebos (a sugar pill will make you feel better), nocebos (a witch doctor will make you ill), talk therapy and meditation. If the top is convinced, the bottom level of data will be overruled. 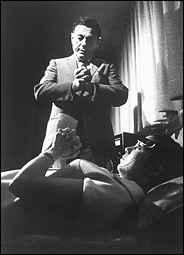 This brain structure would also explain hypnosis, which is all about creating such formidable top-down processing that suggestions overcome reality.

One adult in five is flat out resistant to hypnosis, Dr. Spiegel said. The rest are in between, he said.

In some of the most recent work, Dr. Amir Raz, an assistant professor of clinical neuroscience at Columbia, chose to study highly hypnotizable people with the help of a standard psychological test that probes conflict in the brain. As a professional magician who became a scientist to understand better the slippery nature of attention, Dr. Raz said that he "wanted to do something really impressive" that other neuroscientists could not ignore.

The probe, called the Stroop test, presents words in block letters in the colors red, blue, green and yellow. The subject has to press a button identifying the color of the letters. The difficulty is that sometimes the word RED is colored green. Or the word YELLOW is colored blue.

For people who are literate, reading is so deeply ingrained that it invariably takes them a little bit longer to override the automatic reading of a word like RED and press a button that says green. This is called the Stroop effect.

Sixteen people, half highly hypnotizable and half resistant, went into Dr. Raz's lab after having been covertly tested for hypnotizability. The purpose of the study, they were told, was to investigate the effects of suggestion on cognitive performance. After each person underwent a hypnotic induction, Dr. Raz said:

"Very soon you will be playing a computer game inside a brain scanner. Every time you hear my voice over the intercom, you will immediately realize that meaningless symbols are going to appear in the middle of the screen. They will feel like characters in a foreign language that you do not know, and you will not attempt to attribute any meaning to them.

"This gibberish will be printed in one of four ink colors: red, blue, green or yellow. Although you will only attend to color, you will see all the scrambled signs crisply. Your job is to quickly and accurately depress the key that corresponds to the color shown. You can play this game effortlessly. As soon as the scanning noise stops, you will relax back to your regular reading self."

Dr. Raz then ended the hypnosis session, leaving each person with what is called a posthypnotic suggestion, an instruction to carry out an action while not hypnotized.

In highly hypnotizables, when Dr. Raz's instructions came over the intercom, the Stroop effect was obliterated, he said. The subjects saw English words as gibberish and named colors instantly. But for those who were resistant to hypnosis, the Stroop effect prevailed, rendering them significantly slower in naming the colors.

Top-down processes overrode brain circuits devoted to reading and detecting conflict, Dr. Raz said, although he did not know exactly how that happened. Those results appeared in July in The Proceedings of the National Academy of Sciences.

A number of other recent studies of brain imaging point to similar top-down brain mechanisms under the influence of suggestion. Highly hypnotizable people were able to "drain" color from a colorful abstract drawing or "add" color to the same drawing rendered in gray tones. In each case, the parts of their brains involved in color perception were differently activated.

Brain scans show that the control mechanisms for deciding what to do in the face of conflict become uncoupled when people are hypnotized. Top-down processes override sensory, or bottom-up information, said Dr. Stephen M. Kosslyn, a neuroscientist at Harvard. People think that sights, sounds and touch from the outside world constitute reality. But the brain constructs what it perceives based on past experience, Dr. Kosslyn said.

Most of the time bottom-up information matches top-down expectation, Dr. Spiegel said. But hypnosis is interesting because it creates a mismatch. "We imagine something different, so it is different," he said.