On the Hunt for a Sprite on a Midsummer's Night

By Sandra Blakeslee. Published in New York Times on September 28, 20124. 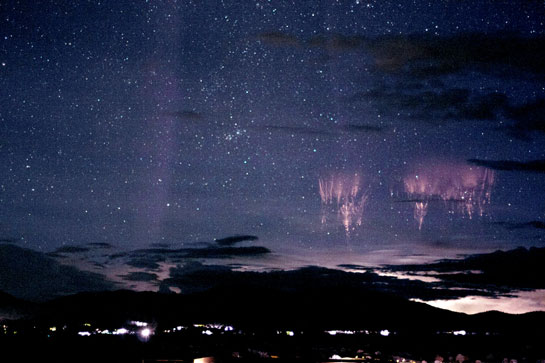 Dancing sprites, majestic emanations of light that flash for an instant high above the thunderheads, over Colorado. Image Credit: Thomas Ashcraft

AMY, N.M. — Every summer evening at 7 o'clock, Thomas Ashcraft receives a personalized weather report. It is monsoon season, and he is getting advice from a meteorologist in Colorado on where to look for the massive thunderstorms that erupt over the western High Plains.

Armed with sensitive cameras and radio telescopes, Mr. Ashcraft hunts for sprites — majestic emanations of light that flash for an instant high above the thunderheads, appearing in the shapes of red glowing jellyfish, carrots, angels, broccoli, or mandrake roots with blue dangly tendrils. (Weather buffs call the tall, skinny ones "diet sprites.") No two are alike.

And they are huge — tens of miles wide and 30 miles from top to bottom. But because they appear and vanish in a split-second, the naked eye tends to perceive them only as momentary flashes of light. It takes a high-speed camera to capture them in detail.

Depending on his skill and luck and the presence of storms, Mr. Ashcraft might get one or two sprite images a night, or more than 300. From June through August this year, he captured sprite images on 29 nights.

Dancing sprites, majestic emanations of light that flash for an instant high above the thunderheads, over Colorado. Image Credit: Thomas Ashcraft

One of a growing corps of citizens who advance the scientific process in every field from astronomy to zoology, he sends his best images to Steven A. Cummer, a professor of electrical and computer engineering at Duke University who leads a multicenter project called Phocal, for Physical Origins of Coupling to the Upper Atmosphere by Lightning.

"We happily take images captured by anyone, either our own cameras or those of citizen scientists like Thomas Ashcraft," Dr. Cummer said. A goal is to capture sprite images from multiple locations to triangulate their position relative to the lightning that creates them.

Sprites are "simply something interesting and unexpected that nature does," Dr. Cummer said. "They are spectacular and kind of amazing." But how — or even if — they affect the physics and chemistry of the atmosphere remains an open question.

Ordinary lightning generates a continuous electric circuit as electrical bolts carry a charge from cloud to ground or, with surprising frequency, from ground to cloud. Do sprites and similar events carry similar charges and create a similar circuit from the tops of storms to the ionosphere? Do they induce chemical changes in the upper atmosphere that affect the earth's ozone layer?

Sprites were not documented until 1989, when a scientist in Minnesota accidentally caught one on videotape. No one knew what to make of them. "It was like biology discovering a new body part," said Walter Lyons, a former president of the American Meteorological Society. His website, WeatherVideoHD.tv, tracks sprites and other unusual weather events from a high ridge in Fort Collins, Colo. People had called sprites rocket lightning, upward lightning, cloud-to-stratosphere lightning, and even cloud-to-space lightning, he said. To avoid implying that anyone knew their physical mechanisms, the strange lights were given the fanciful name sprites, inspired by the mysterious and fleeting characters populating Shakespeare's "The Tempest."

Sprites form in the mesosphere, a little-studied portion of atmosphere about 30 to 55 miles above the earth, too high for planes to fly and too low for satellites to orbit. "We knew they were related to big honking thunderstorms" and to lightning, but not much else, Dr. Lyons said. Were they a hazard to spacecraft? To astronauts? Did they affect weather on earth?

Since their discovery, some basic questions have been answered. Not all thunderstorms produce sprites, but those that do feature a type of lightning that carries a positive charge — which, for reasons still not understood, tends to be more powerful than negatively charged bolts.

When positive lightning drops vast amounts of electrical charge to the ground, the electric field in the thin upper atmosphere simultaneously increases and, within thousandths of a second, breaks down to form a huge spark — a sprite — some 45 miles high.

Sprites over western Oklahoma on June 9, 2014. The speed of this video has been slowed and looped to make the phenomena more visible. Image Credit: Thomas Ashcraft

The sprite then generates house-size balls of ionization, called streamers, that speed downward, then upward, at 10 percent the speed of light, exciting nitrogen molecules that glow blue or red depending on pressures at different altitudes.

In years of observation, researchers have uncovered a fairyland of mysterious objects related to sprites: 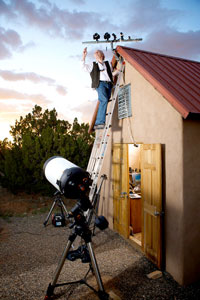 Answers to what these phantasmagoria are doing in the upper atmosphere may lie in more and better images of luminous events, which is why Mr. Ashcraft, a 63-year-old artist, hunts sprites. He works out of a funky wooden shack housing an enviable science station. Six cameras are fixed to the roof, some of them modified to capture light from the infrared and near-infrared parts of the spectrum, where sprites are most visible.

Behind the shack, he has laid out six radio-telescope arrays along spines of juniper and pinyon trees to observe not just sprites but also gravity waves, Jupiter, the sun, space dust and meteors. 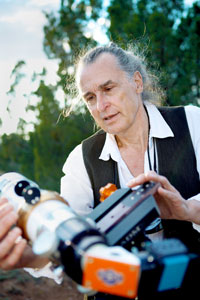 Thomas Ashcraft uses cameras and radio telescopes in his backyard observatory to document sprites. On any given night, he might capture one or two sprite images or more than 300. Image Credit: Gabriella Marks for The New York Times

His location is perfect: dry and clear, with a grand view of the sky over the Great Plains. Thanks to his 7,000-foot altitude and the extremely clear local atmosphere, his cameras can see more than 600 miles in all directions, into the skies over Wyoming, Kansas, Nebraska, Oklahoma, Arizona, Utah, northern Mexico and, of course, all of New Mexico and Colorado.

When Mr. Ashcraft gets word that thunderstorms are brewing, he checks radar images on the Weather Underground website to find the heaviest rainstorms, climbs an aluminum ladder to his roof, checks the compass on his smartphone and points his cameras toward the storm.

"I have developed a knack of getting the right altitude," he said. If a storm is close, he aims the cameras high. If it is far away, he aims lower. He takes shots every two to four seconds, depending on the light, at 60 images per second. After an hour, he climbs the ladder, removes the smart cards from his cameras and takes them down to his computer.

But then a sprite may pop up. If his cameras line up with a storm just right, he can capture a dancing chorus line of them, while his low-frequency radio receivers emit pops and crackles characteristic of lightning.

A real treat came two summers ago, when Mr. Ashcraft got video of gravity waves — glowing spherical ripples, generated by thunderstorms, that travel up through the mesosphere to the ionosphere.

But when he talks about sprites, his eyes light up with joy.

"I am feasting on sprites," he says. "They are jaw-droppingly beautiful."