Scientists Hope to Bring a Galápagos Tortoise Species Back to Life

The dodo is dead. The passenger pigeon has passed on. But Lonesome George, the iconic Galápagos tortoise whose death marked the end of his species, is in post-mortem luck.

A scientific expedition has discovered some of his close blood relations alive and well. With careful breeding, biologists now hope to revive George's species and reintroduce the tortoises to the island on which they evolved.

It would be a signal achievement in a place that gave rise to our understanding of evolution and speciation.

Originally there were at least eight species of Galápagos tortoise, scientists now believe. (One was discovered only this year.) At least three species are now extinct, including tortoises on Pinta Island. The last one, George, was discovered wandering alone in 1972 and taken into loving custody. His death, in 2012 at more than 100 years old, was a powerful reminder of the havoc visited by humans on delicate ecosystems worldwide over the last two centuries.

Tortoise numbers plummeted from more than 250,000 in the 16th century to a low of around 3,000 in the 1970s. In the 19th century, whalers, pirates and other seafarers plucked the animals from their native islands for use as ballast and food on long journeys. Tortoises can live in a ship's hold for more than a year without food or water, making them the perfect takeaway meals. 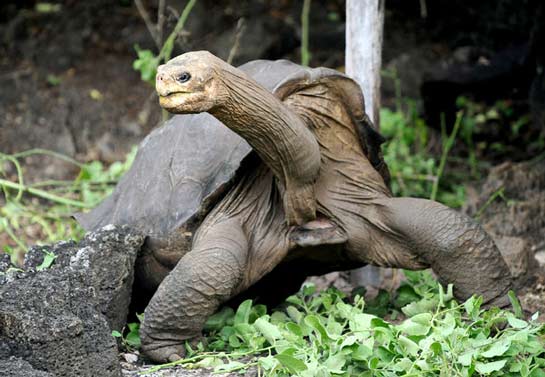 There are two types of Galápagos tortoises: saddlebacked and domed. The sailors much preferred the smaller saddlebacks, which were easier to lug around and said to taste better. They were also easier to find: Domed tortoises live at higher elevations and can weigh 300 pounds. Saddlebacks evolved at lower elevations and feed on drier vegetation.

Saddlebacked tortoises disappeared from Santa Fe Island and Floreana Island, a favorite hangout for sailors posting letters for other ships to carry home. With George's death, the Pintas were gone, too.

But now the story of extinct Galápagos tortoises has taken a strange, and hopeful, twist.

More than a century ago, it turns out, sailors dumped saddlebacked tortoises they did not need into Banks Bay, near Wolf Volcano on Isabela Island. Luckily, tortoises can extend their necks above water and float on their backs. Many of them made it to shore, lumbered across the lava fields and interbred with Isabela's native domed tortoises.

In 2008, scientists tagged and collected blood samples from more than 1,600 tortoises living on the flanks of the volcano. Back in the laboratory, there was a genetic eureka: Eighty-nine of the animals were part Floreana, whose full genetic profile DNA had been obtained from museum samples.

Some had genes indicating their parents were living purebred Floreana tortoises, hinting that the species may not be extinct after all.

Seventeen tortoises were shown to have high levels of Pinta DNA. Tortoises can live for more than 150 years, so some of them may well be George's immediate next of kin.

Last month, scientists went back to find them. Their plan was to capture and separate tortoises with high levels of Pinta and Floreana DNA, and then breed animals that are genetically closest to the original species.

In just a few generations, it should be possible to obtain tortoises with 95 percent of their "lost" ancestral genes, the scientists said.

"The size of this population is mind-boggling," said Adalgisa Caccone, a senior research scientist at Yale University and the expedition's geneticist, said of the Wolf tortoises. "I am optimistic that some of these animals will have high conservation value."

But "this is the first time that genetic information has been used so determinedly," she said, to manage a species and its environment.

With captive breeding and luck, new populations of tortoises could be released on Pinta and Floreana Islands in five to 10 years, helping to restore their lost ecosystems, Dr. Cayot said. Because tortoises cruise close to the ground, they disperse seeds and other nutrients that keep the land healthy. 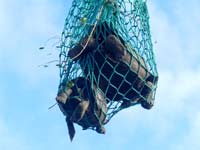 The expedition to Wolf Volcano occurred over the last 10 days of November under the direction of James P. Gibbs, a professor of vertebrate conservation at the State University of New York in Syracuse. Nine three-person teams were deployed over a 20-square-mile area.

It was rough going, with razor-sharp lava underfoot, and ticks and wasps all around.

The teams were looking for tortoises with the most prominent saddlebacks: shells rising up in front, like saddles, to accommodate the animals' extremely long necks for grazing on tall cactuses. The hope is that animals with characteristic shells will have the highest levels of Pinta and Floreana DNA.

Two teams found "hot spots" of saddlebacks at the southern end of the search area with low-lying, dry vegetation, Dr. Gibbs said. The best specimens were captured relatively close to one another.

The pattern is remarkable, Dr. Gibbs said. After being jettisoned into Banks Bay more than a century ago, the saddlebacks have not moved more than a few miles. They found food and water, so why bother?

In all, the expedition discovered more than 100 giant tortoises that share George's distinctive saddleback shape. When a team captured a tortoise with an ideal saddleback, they called the expedition's ship, anchored in Banks Bay. A helicopter then fetched the animal in a cargo net.

Scientists took 32 tortoises with the most spectacular saddles to a breeding center on Santa Cruz Island. The captured tortoises include 21 females and 11 males, each weighing 100 to 300 pounds. Most appear to be 30 to 40 years old, Dr. Gibbs said, though a few could be much, much older.

Seven of the animals tagged and analyzed in 2008 were retrieved — one male and one female with Pinta DNA, and one male and four females with Floreana genes. "We are planning to go back next year to look for more," Dr. Gibbs said.

Today, the female tortoises are housed in Lonesome George's corral. The males are next door in a tourist pen.

"They are very busy, very happy, exploring and doing aggression displays," Dr. Caccone said. "Males stand on three legs, necks raised as high as they can go, and hiss at each other."

The next step is to analyze each animal's DNA to separate the two species and find those with the least mixed ancestry. Then the breeding program can begin.

"If I had the money and people, it would take me a month" to do the analysis, said Dr. Caccone, noting the expedition's tight budget. Realistically, she said, it may take a year or more.

One of the males is a doppelganger for Lonesome George, said Elizabeth Hunter, a postdoctoral researcher on the expedition from the University of Georgia. When first captured, he raised himself up in a classic George pose.

He is now showing off for tourists, just like the old George.