To Advance, Search for a Black Cat in a Dark Room 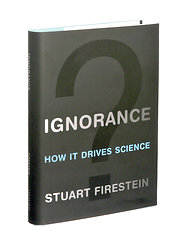 Many people think of science as a deliberate process that is driven by the gradual accumulation of facts. Legions of smart scientists labor to piece together the evidence supporting their discoveries, hypotheses, inventions and progress itself.

But according to Stuart Firestein, a professor of neuroscience at Columbia University, this view is fallacious. Working scientists don't get bogged down in factual swamps, he says, because they don't care all that much for facts. Facts are not what science is all about. It's only when the facts fail that scientists really put on their thinking caps.

In this sense, ignorance is not stupidity. Rather, it is a particular condition of knowledge: the absence of fact, understanding, insight or clarity about something. It is a case where data don't exist, or more commonly, where the existing data don't make sense.

To show how scientists depend on ignorance, Dr. Firestein has written a short, highly entertaining book aimed at nonscientists and students who want to be scientists.

The book comes at an important time. Today's most vociferous scientific controversies turn on different interpretations of facts — about climate change, about contraception, about evolution. When politics are injected, the shouting grows louder, the thinking muddier. Uncertainty is a dirty word.

Dr. Firestein, by contrast, celebrates a tolerance for uncertainty, the pleasures of scientific mystery and the cultivation of doubt. If more people embraced the seductive appeal of uncertainty, he says, it might take some acrimony out of our public debates.

Dr. Firestein got the idea for his book by teaching a course on cellular and molecular neuroscience, based on a 1,414-page textbook that, at 7.7 pounds, weighs more than twice as much as a human brain. He eventually realized that his students must think that pretty much everything in neuroscience is known. "This could not be more wrong," he writes. "I had, by teaching this course diligently, given the students the idea that science is an accumulation of facts.

"When I sit down with colleagues over a beer at a meeting, we don't go over facts," Dr. Firestein writes. "We don't talk about what's known. We talk about what we'd like to figure out, about what needs to be done."

He realized he was failing to teach ignorance, the most critical part of the scientific enterprise, which led to the creation of a course titled "SNC3429 Ignorance."Dr. Firestein likes to tease students in the class about what kind of grade they want: Is it better to get an A or an F in ignorance?

In his book, Dr. Firestein writes that conducting science is something like searching for a black cat in a dark room — very difficult, especially when, as is often the case, it turns out there is no cat.

To explore scientific groping in the dark, Dr. Firestein invites university colleagues from various disciplines to talk to his students about what they don't know.

Diana Reiss, a cognitive psychologist at Hunter College and the City University of New York and Dr. Firestein's wife, studies the minds of animals. She wonders if there is a smooth progression of mental function as animals become more evolved, or if there is a mysterious discontinuity that separates human consciousness from whatever is experienced by other animals.

The problem is that "mind" tends to be circularly defined as something that only humans have. According to Dr. Reiss, this definition is useless. It creates ignorance in the wrong way — by appearing to mean something when it means nothing.

"Why do we think animals don't think?" she said. "We begin with a negative starting assumption and then must prove that they do."

In exploring animal minds, Dr. Reiss does the opposite: She assumes that they can think and patiently gives them opportunities to demonstrate their abilities. To gasps of surprise, she has shown that dolphins and elephants, like humans and chimpanzees, can recognize themselves in a mirror.

These experiments do not answer questions so much as raise more of them, Dr. Firestein notes. "And questions are more relevant than answers," he adds.

But not all ignorance is valuable, of course. "It has to be really good ignorance, the kind that leads to ever deeper questions," Dr. Firestein said. "This might make nonscientists more interested in what scientists do — we're all ignorant together."

To get a feel for how scientists really think, he offered this advice: Next time you meet a scientist — at a dinner party, at your child's school, just by chance — don't ask her to explain what she does. Ask her what she's trying to figure out.

Picture: Book cover for "IGNORANCE How It Drives Science" By Stuart Firestein